Jacques d’Amboise and Arthur Mitchell share the Heinz Award in the Arts and Humanities for moving beyond their own individual achievements as two of America’s - and the world’s - premier classical dancers. They have individually rededicated their extraordinary talents to offer inner-city children a golden glimpse of a world not governed by poverty, deprivation or conflict, but rather one of discipline, of dreams, of hope - a world of art.

As young men, both resisted the potentially destructive enticements of the mean streets of their New York City neighborhoods, Mr. d’Amboise in Washington Heights and the Harlem of Mr. Mitchell. Their talent was unmistakable, however, and led both of them to careers with the New York City Ballet in the 1950s. Mr. d’Amboise electrified audiences with his virility and exuberant athleticism. Mr. Mitchell, as the first Black male dancer to become a member of a major ballet company, was mesmerizing in his elegance and strength.

Despite their successes, neither of these incredibly talented dancers was content to rest on his professional laurels. In 1969, Mr. Mitchell responded to the death of Martin Luther King Jr. with a determination to share with the children of Harlem the kind of opportunities he felt had been given to him and so, 30 years ago, in a New York City garage, the Dance Theatre of Harlem was born. In a similar personal commitment, in 1976, Mr. d’Amboise founded the National Dance Institute, with the goal of permitting inner-city school children the opportunity to experience, as he had, the sheer joy of pursuing excellence in an art form, be it dance, painting or music.

Today, the Dance Theatre of Harlem is a world-famous institution, credited with playing the single most significant role in helping to break down racial stereotypes in dance and with pioneering a uniquely American perspective in classical ballet. Arthur Mitchell’s extraordinary commitment to identifying and developing artistic talent has provided a chance for professional achievement and recognition in the arts for scores of leading dancers who might otherwise have been denied the chance to share their creativity. The Dance Theatre of Harlem, its birth, survival and success, ranks as one of this nation’s most inspiring cultural achievements.

Likewise, the National Dance Institute is today one of the nation’s largest arts education organizations, having fostered a heightened awareness of the arts and self in over a half million urban students. Using a distinctive combination of dance classes, performances and educational materials, the Institute offers a unique experience in developing self-esteem, discipline and a standard of achievement among inner-city youth. Its success must be credited to its founder’s commitment to make the arts accessible to all children as an integral part of their education and with performance goals that inspire hard work and perseverance.

Jacques d’Amboise and Arthur Mitchell have demonstrated that it is not sufficient just to be legends. They have generously taken their individual joy in dancing and channeled it into new directions. In the process, they continue to nourish the spirit of young people by using their art to instill feelings of hope, courage, understanding and pride in those who might otherwise never know such accomplishments.

“Dance is the one common language of all people. It transcends all words. There are certain movements that everyone does and everyone understands. There is a commonality in dance that is universal.” 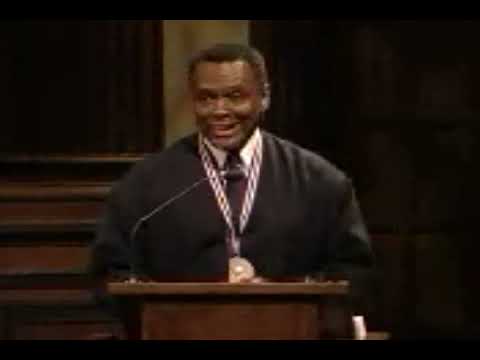