Bernice Johnson Reagon received the 9th Heinz Award for the Arts and Humanities for her work as a musician and cultural historian who has raised her voice in both song and civil rights advocacy.

A woman of significant accomplishment, she has served as Distinguished Professor of History at American University, curator emerita at the Smithsonian Institution’s National Museum of American History and as the founder and long-time artistic director of Sweet Honey In The Rock, a world-renowned a cappella ensemble of Black women. Success in any one of these fields would be noteworthy, but she has combined music, a commitment to social justice and academic excellence, and has earned esteem in all three.

Music has been part of Dr. Reagon’s life for as long as she can remember. She was one of eight children of a Baptist minister in rural Georgia. The family church had no piano, so she learned to create the uplifting spirit that is gospel music by singing, clapping her hands and stomping her feet.

In the 1960s, during the civil rights movement, the young scholarship student at Albany State College joined the Student Nonviolent Coordinating Committee (SNCC). The college administration would not condone activist participation in marches and demonstrations and suspended her. Undeterred, she spent the next five years as an SNCC Freedom Singer, folklore field researcher and organizer of community-based cultural events. The experience set the template for the rest of her life.

Dr. Reagon studied society by confronting it. And she realized that singing was more than just entertainment, her inspired music more than just pleasing to the ear. Song was an integral part of her culture. Her ancestors had never learned to read and write, so the oral tradition was often the only way for Black Americans to pass on history through the generations. What better way than through the passionate eloquence of song?

She eventually resumed her formal education and earned a doctorate in American history. Dr. Reagon spent 20 years as a folklorist, scholar and curator at the Smithsonian. She was among the scholars who helped the national museum diversify its collections and exhibits.

She spent almost 15 years researching and five years in the production of the “Wade in the Water” project, a National Public Radio series on Black sacred music of the 19th and 20th centuries that went on to win a prestigious Peabody Award. She has been a composer, consultant and performer for the award-winning PBS programs “Eyes on the Prize” and “We Shall Overcome.”

Dr. Reagon’s life’s work has been centered on telling the story of Black cultural power and traditions. She has used her unique gifts to broaden public understanding and appreciation of the Black experience in the United States. As with our first Arts and Humanities recipient, the historian and filmmaker Henry Hampton, Bernice Johnson Reagon is being honored for her work that combines both the arts and the humanities.

“I discovered that the language through which I could speak the clearest was through singing songs that had been passed to me as well as new songs that chronicle the times through which we move. That has been the sweetest blessing.”

Bernicejohnsonreagon.com
Sweet Honey in the Rock 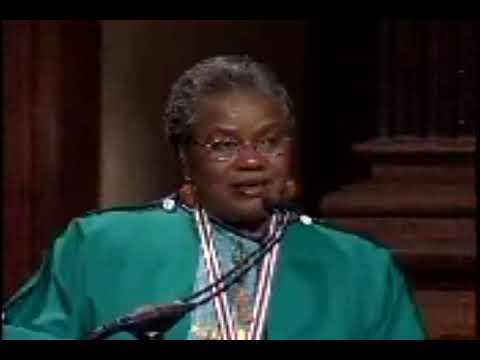 Bernice Johnson Reagon and Toshi Reagon's operatic adaptation of Octavia E. Butler's "Parable of the Sower" to be presented by the University Musical Society