Geraldine Jensen received the 9th Heinz Award for Public Policy for channeling her frustrations over an inability to collect child support for two young children into a national movement that reformed child support enforcement.

Geraldine Jensen is an improbable heroine. Over 20 years ago as a divorced mother of two sons, she found herself destitute, homeless and unable to support her family. Her ex-husband owed more than $12,000 in child support, but local officials rebuffed her pleas for help because her ex-husband had moved and could not be located. She did her own research to find his address and employment information, but officials said their hands were tied because he lived out of state. Finally, a local prosecutor complained, “I’m sick and tired of you women whining and complaining about your child support. If you think you can do a better job, go do it.” So she did just that.

With $8.86 of her last $12.00, Ms. Jensen purchased a small ad in the Sunday edition of the Toledo Blade newspaper saying, “Not Receiving Your Child Support? Call Me.” A number of custodial parents in similar situations responded. She organized a meeting and within two weeks founded the Association for Children for Enforcement of Support (ACES).

Since that modest start, ACES has grown into the nation’s largest child support organization, with 400 chapters in 48 states and more than 50,000 members nationwide. The organization has helped empower thousands of desperate custodial parents, most of them women, to obtain the money courts ordered paid for the support of their children. The federal Office of Child Support estimates that more than 20 million children are owed more than $83 billion in court-ordered child support. Many women, like Ms. Jensen herself, wind up on public welfare for a time because of non-support.

Ms. Jensen has also become a leading advocate of system reform. Under old laws, parents were not bound by child support orders of one state if they moved to another, and many non-custodial parents moved from state to state to dodge their responsibilities to their children. Ms. Jensen was a catalyst behind passage of the 1992 Child Support Recovery Act. That law makes it a federal offense to avoid child support if you live in a state other than where your children live. She has also been instrumental in the creation of a national computer network linking child support information from all the states, including laws that allow support to be collected through a payroll deduction. In 1995, ABC produced a made-for-television movie called “Abandoned and Deceived,” based on Ms. Jensen’s struggle and the creation of ACES.

Ms. Jensen embodies the uniquely American can-do spirit. She is a woman who found herself in a desperate situation but refused to be broken by the difficulties she faced. She took her own adversity and not only turned around her own life and the lives of her two sons but created a movement that has alleviated poverty for thousands of other children.

Geraldine Jensen has committed 20 years to ensure that the children of divorced parents do not become victims of poverty because of unpaid child support. Her vision and hard work have mobilized and inspired custodial parents and that convinced lawmakers to close loopholes and stiffen the penalties on deadbeat parents. 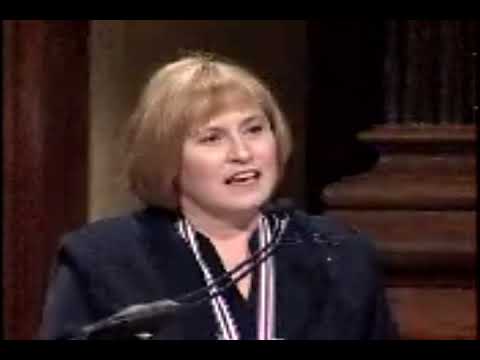