Dr. Hugh Herr received the 13th Heinz Award for Technology, the Economy and Employment for his pioneering work in new prosthetics that merge body and machine.

An MIT professor, researcher and inventor, Dr. Herr is pioneering revolutionary work in the emerging field of biomechatronics – technology that marries robotics and human biomechanics. A double amputee himself, he is responsible for breakthrough advances in prosthetics and orthotics, giving greater mobility and new hope to those with physical disabilities.

There was a time that prostheses were hampering devices, causing jerky movements and unnecessary exertion for their users. Each unit had to be oriented to the individual, by a professional, and based on stride length, weight, flexion and other measurements. Even after all of this, the resultant stride was rigidly the same, whether the wearer was walking, running or climbing rocks.

And that brings us to Dr. Herr, who at age 17 became one of those statistics. He lost both of his legs below the knees following a rock climbing accident on Mount Washington in New Hampshire. It was his personal experience with prostheses that spurred him to focus his talents on improving the movement of disabled individuals through enhanced artificial limbs.

He returned to the classroom after a few years to earn an undergraduate degree in physics, a master’s degree in mechanical engineering from MIT and a Ph.D. in biophysics from Harvard. Today, directing the Biomechatronics Group within MIT’s Media Lab, his work focuses on human amplification and rehabilitation systems – technologies that interact with human limbs that amplify function.

With more than 36,000 new amputees in the United States every year – including hundreds of American soldiers who have lost limbs in the wars in Iraq and Afghanistan since 2001 – Dr. Herr is helping improve mobility and enhance the quality of life for many physically challenged people around the world. The holder or co-holder of numerous patents, including the Computer-Controlled Artificial Knee (commercially available as the Rheo Knee), the Active Ankle-Foot Orthosis, and the world’s first Powered Ankle-Foot Prosthesis, he is advancing an emerging field of science that applies the principles of muscle mechanics, neural control and human biomechanics to guide the design of biomimetic robots, human rehabilitation devices and other technologies.

Dr. Hugh Herr is not simply an example of the human spirit overcoming adversity; his work is a triumph of intellect and innovation and his breakthrough advances in rehabilitation technologies are immeasurably improving the quality of life for thousands of people with physical challenges.

“Humans are not disabled. A person can never be broken. Our built environment, our technologies, are broken and disabled. We the people need not accept our limitations but can transcend disability through technological innovation.” 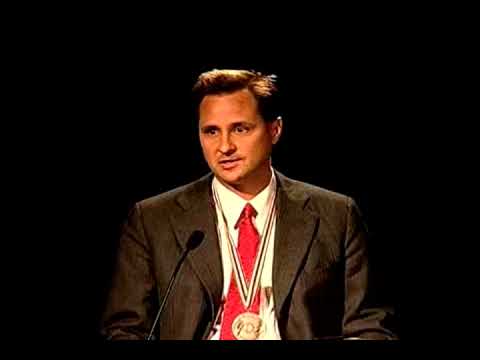