Jane Lubchenco received the 8th Heinz Award for the Environment for her role in broadening awareness of the importance of biological sustainability to the future of humanity, her efforts to raise the visibility of ocean issues, her commitment to opening the lines of communication between scientists and citizens, and her pioneering concept of the social contract that exists between science and society.

Based on a brilliant scientific career, and after years of dedicated service, Dr. Lubchenco is one of our most respected and recognized ecologists. She has shown that, while science should be excellent, pure and dispassionate, scientists should not sacrifice their right – and must not ignore their responsibility – to communicate their knowledge about how the earth is changing or to say what they believe will be the likely consequences of different policy options.

In 21st-century America, a majority of scientists foresee drastic climate and ecological change. They postulate that an overproduction of greenhouse gases has increased the earth’s surface temperature, and that this variation may lead to flooding, droughts and scarcity of resources. Dr. Lubchenco was one of the first scientists to present this dilemma to policymakers and the public. A firm believer in the ability of science to improve the quality of human and ecological life, she has been a pioneer in the practice of creating environmental policy through the widest distribution of scientific research.

A professor of marine biology at Oregon State University since 1977, her research has added substantially to our knowledge and understanding of ocean communities. During the 1980s, she was a leader of the unprecedented dialogue within the research community, exploring a wide array of alternative scenarios regarding the future of environmental science. At a time when many ecologists were still content to concentrate on topics of purely intellectual interest, she urged that the relevance of ecological research to social problems be made more obvious.

At conferences and in papers, Dr. Lubchenco has pointed out the ominous and undeniable indications of the ways in which human activities have unintentionally caused shifts in environmental stability. Determined to turn these warnings into wake-up calls, she points out that global sustainability and long-term human survival may depend on people becoming better stewards of the ecosystems upon which all life depends.

Although her contributions to scientific knowledge are significant and ongoing, she is perhaps most widely recognized for her efforts to bridge the gap between scientists and society.

In her address as president of the American Association for the Advancement of Science in 1997, Dr. Lubchenco limned the intimate connections between ecological systems and human health, the economy, social justice and national security, and introduced the seminal concept of a “social contract” between scientists and society. That contract, she said, should express a commitment to harnessing the full power of science in discovering new knowledge, in communicating existing and new understanding to the public and policymakers, and in helping society move toward a more sustainable biosphere.

Jane Lubchenco has shown that the environment is not a partisan issue whose politics should divide us, but a shared legacy whose preservation must unite us. From the classroom to the newsroom to the Oval Office, she has proclaimed and exemplified her message of the importance of incorporating sound and clearly stated scientific ecological principles into responsibly enacted public policy.

“It’s time to stop thinking of the ocean as a victim of climate change and start thinking of it as a powerful part of the solution.” 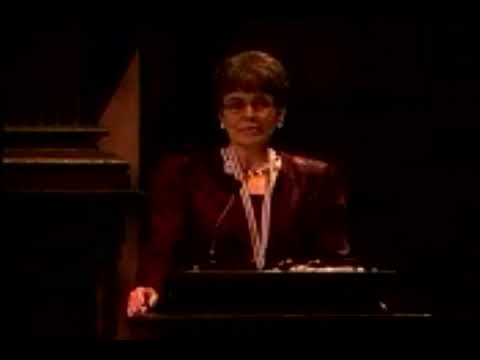