Jerry Franklin received the 11th Heinz Award for the Environment for transforming forest management in a way that helps to better sustain America’s forests.

A forest ecologist and progenitor of a new paradigm integrating ecological and economic objectives in managing the nation’s forests, Dr. Franklin has been dubbed the “father of new forestry.” He is one of the country’s leading authorities on sustainable forest management, and his once-unconventional views on forest management have since become established practice.

Dr. Franklin challenged the long-accepted practice of clear-cutting and, instead, advanced solutions that were based more on science. His “new forestry” strategy for logging - which advocates leaving logs and other wood debris, standing dead trees and some larger live trees - more closely aligns with the scale and character of natural disturbances. While his views were met at first with skepticism and derision within the industry, his “new forestry” principles now have been embraced by environmentalists and timber companies alike.

Long before he became known as the “guru of old-growth forests,” Dr. Franklin was a research forester for the USDA Forest Service, a position he accepted in 1959. Since then, he has established a legacy of long-term experiments designed to enrich the science of future generations. His knowledge of the distinctive and vital attributes of old-growth forests, as well as his understanding of natural disturbances and the ecosystem recovery process, have placed him on many local, national and global commissions dedicated to scientific and policy analyses of forest issues.

He was director of the ecosystem studies program for the National Science Foundation and president of the Ecological Society of America, among other positions. In 1993, he was among the scientists who assembled with President Clinton to discuss old-growth preserves, logging practices and threatened and endangered species. He was a major contributor to the Northwest Forest Plan, the first large ecologically integrated forest plan in the world, which covered 24 million acres of federal lands in the Northwest. The plan resolved the controversy over the spotted owls and timber jobs.

Dr. Franklin’s career as a teacher began in 1975 at Oregon State University. Later, he became professor of ecosystem analysis at the University of Washington in Seattle, and now serves as the director of the Wind River Canopy Crane Research Facility, where he has installed a 250-foot-tall construction crane that allows scientists to probe the relationship between forests and climate change within the canopy.

With unwavering courage and conviction, wisdom and passion, Dr. Jerry Franklin has dramatically expanded our knowledge of natural forest ecosystems and used this knowledge to help redefine forest management in the United States and many parts of the world. Because of his contributions, millions of acres of forests have a more sustainable future.

“The world’s forest is a treasure for mankind, providing an incredible array of goods and services — from such basics as water and wood to the most inspirational. ...Incredibly, we have only really touched the surface of their many secrets.” 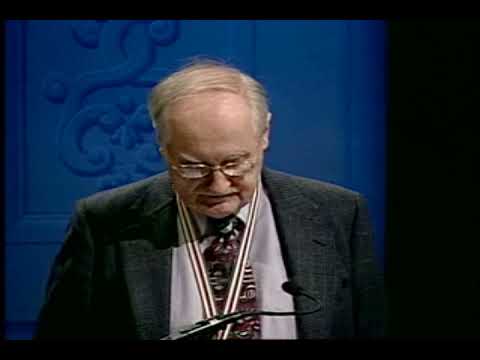