Sidney Drell received the 11th Heinz Award for Public Policy for his decades-long contributions toward reducing the threat of nuclear catastrophe while ensuring the nation’s security and military pre-eminence.

A theoretical physicist, educator and authority in the arena of arms control, Dr. Drell has provided wise and firm counsel for more than 40 years. His tireless and effective leadership has helped advance the United States’ efforts to reduce the danger and proliferation of nuclear weapons, without ever compromising the nation’s defense.

In addition to his academic career at Stanford University doing pioneering research in elementary particle physics, Dr. Drell has been a ubiquitous presence in the debate over major defense issues. He has served on countless advisory panels to Congress, the U.S. Departments of Defense and Energy and the Central Intelligence Agency and is a member of an elite cadre of scientists who advise the government on technical and highly classified national security matters. He is currently a professor emeritus at the Stanford Linear Accelerator Center, having retired as its deputy director in 1998, and is a senior fellow at Stanford’s Hoover Institution.

As a scientist, Dr. Drell’s contributions through the years have been varied. He helped fix bugs in the nation’s first reconnaissance satellite, Corona; helped develop verification methods for the world’s first nuclear arms control treaty, and was a leading scientific critic of the ballistic missile defense system during the 1980s.

Dr. Drell is a founding and still-active member of JASON, a prestigious advisory panel of academic scientists on various issues related to national security. Ten years ago, when the nation was faced with the debate over whether weapons labs should be able to conduct underground nuclear weapons explosions in order to assure that the warheads were safe and reliable, he led a JASON study that concluded that nuclear testing was not necessary to assure the effectiveness and safety of weapons. Only last year, his intellectual arguments in opposing a new nuclear weapon (the so-called “bunker buster”) helped provide the rationale for removing much of the proposed funding of the weapon from the omnibus budget bill.

In mentoring other scientists through the years, Dr. Drell has urged each of them to analyze the public policy implications of advances in their field of work. He has also mentored many scholars in public policy and arms control, and urged them to ground their policy work in underlying technical realities.

With unparalleled expertise and a steady, reasoned point of view, Dr. Sidney Drell has had a profound influence on American policymakers throughout the Cold War and beyond. His contributions have helped reduce the threat of nuclear calamity and have made the world a safer place in which to live.

“Science knows no boundaries, and efforts to create barriers — whether to keep new ideas within or to prevent new ones from entering from the outside — have universally proved harmful to progress.” 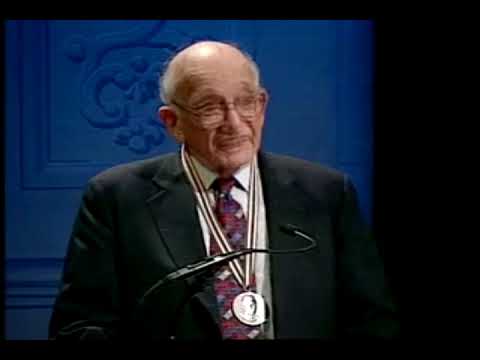