Steve Wozniak received the 7th Heinz Award in Technology, the Economy and Employment for single-handedly designing the first personal computer and for then redirecting his lifelong passion for mathematics and electronics toward lighting the fires of excitement for education in grade school students and their teachers. Known simply and affectionately as “Woz,” he invented the Apple I computer and its successor, the Apple II, and then left the corporate fast track for a life devoted to his family, philanthropy and teaching.

It has been 25 years since Mr. Wozniak and “the other Steve,” Steve Jobs, who had once been a classmate in high school, revolutionized the computer industry when they built and marketed the first computer designed for general public use. What was begun as a two-person operation in the Jobs garage grew to a $500 million a year company in just six years. But Mr. Wozniak, who never did join the business side of the company, just continued inventing. “I just wanted to design neat things,” he says.

Woz’s second great ambition was teaching, which has consumed much of his time for the past decade. He made a significant investment in the future in the late 1980s by “adopting” the 5th through the 8th grades in the local Los Gatos School District in California. His hands-on teaching of the youngsters exemplifies the technologist turned educator. He not only provided the students with portable computers, he wired the school for Internet access, teaches computer skills to them and their teachers, and lives by truly believing that “being able to teach somebody to do something means more than doing it yourself.”

The Silicon Valley legend fell in love with math and electronics at an early age. He enrolled in undergraduate studies at the University of California, Berkeley but dropped out in his senior year in 1971 to join Hewlett-Packard. He created his own designs, including Apple I, in his free time while at H-P and frequented the Homebrew Computer Club, which had also attracted Mr. Jobs. Woz eventually returned to Berkeley to earn his undergraduate degree in engineering after he achieved fame and fortune at Apple. But Woz is more than an engineer. He is generally considered to have accomplished a feat unlikely to be repeated, he is the only person to ever design both the hardware and the software for a computer platform that became a huge commercial success.

Woz developed a way to connect the Apple computer to a printer and went further to develop the first floppy disc (drive), a removable floppy disc with information on it that can be put into the computer memory for storage or accessed without being stored, greatly increasing the ability of people to use the Apple computer.

The Apple II is one of the most significant developments of the 20th century in that it was the first time the power of a computer was made available to the individual. Mr. Wozniak’s design was brilliant because of its simplicity.

Steve Wozniak is considered the single most important person in the microcomputer revolution and is also one of its most interesting humanitarians. What he did he did because it was fun and he is more surprised than anyone that it amounted to anything. What it has amounted to has been seminal contributions to an industry, the impact of which is felt throughout homes and businesses worldwide.

“Our first computers were born not out of greed or ego, but in the revolutionary spirit of helping common people rise above the most powerful institutions.” 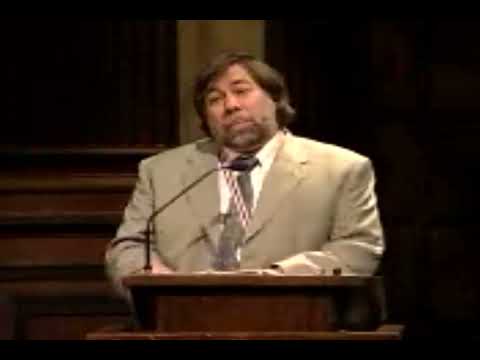